From the late 18th century Kendal became an important regional centre of marble and stone chimneypiece production, establishing a reputation for fashionable design, fine materials and high-quality workmanship which resulted in royal commissions from George IV for the supply of marble chimneypieces for the Great Hall at Windsor Castle and from the Tsar of Russia, for the Winter Palace in St. Petersburg.

The architect-mason firm of Websters of Kendal made the most significant contribution in this field, being the first to utilise water power to polish local limestone into a ‘semi-marble’ using revolutionary machinery installed on the banks of the river Kent at their Helsington works, near Kendal in 1797. This enabled masons to cut and polish the hard limestone quarried at Kendal and the surrounding area for the first time on a commercial basis.

Access to traditional European marbles favoured for chimneypieces, including Carrara, Sienna and Bardiglio marbles exported from Tuscany, Italy through the port of Livorno into Liverpool and from there on to Milnthorpe, (Westmorland’s only port), was disrupted during the Napoleonic Wars. The use of British semi-marbles was promoted as a patriotic alternative and soon became very fashionable for chimneypieces, following an growing interest in British semi-marbles established, from the third quarter of the 18th century, by the Duke and Duchess of Devonshire at Chatsworth, Derbyshire.

Webster’s first-recorded semi-marble chimneypiece was supplied to the Strickland family for the parlour at Sizergh Castle, Helsington in c.1798. It was cut from red and white semi-marble, utilising a seam of this unusually-coloured limestone discovered on the banks of the river Kent in Helsington on the Sizergh estate.

A decade later Webster worked as the executant architect for the Liverpool architect Joseph Gandy on the remodelling at Storrs Hall, Windermere from 1808,  where he met the influential designer George Bullock, who kept showrooms in Liverpool and London. Bullock employed bold, stylised Greek Revival motifs in his designs and was renowned for his work on chimneypieces, fireplaces and furniture.  He was a great proponent of the patriotic use of British semi-marbles, working a quarry on Anglesey which produced a green serpentine marble. His influence is apparent in Webster’s subsequent designs for marble chimneypieces.

The Greek Revival style of architecture was widely favoured in the region by members of newly-emerging commercial elites including numerous overseas merchants, (as at Storrs Hall for an Ulverston-born Liverpool merchant), and bankers (including Helm Lodge, Kendal built for a Kendal banking family). Websters produced many fine chimneypieces for country houses of the region over the next two decades, many in the Greek Revival style, some of which occasionally become available through our showrooms for use in regional country house restoration projects.

Websters were one of a number of Kendal-based firms who took advantage of demand for British semi-marble during a period of regional country-house building and remodelling in the early 19th century. Following the cessation of the Napoleonic wars and the resumption of marble imports from Europe, Websters’ chimneypiece showroom displayed examples of their work in a wide range of European and British marbles, attracting gentry from as far away as the Newcastle region, their visits facilitated by improved transport via the stagecoach on improved turnpike roads.

Their showrooms and works were strategically located next to Webster’s Bridge, Kendal at the head of the newly-opened section of the Lancaster canal, enabling Websters to economically access marble imported into Northwest ports and to export finished chimneypieces to a wider area. The opening of the Kendal section of the canal in 1819 resulted in further expansion of the area’s fireplace production. By 1830 thousands of chimneypieces were exported each year via the canal system, especially more simple-quality examples which fed the building boom in the Northwest region’s growth towns including Liverpool and Manchester.

By the mid-19th century Kendal’s chimneypiece production declined as the fashion for marble and stone chimneypieces wained and increasing industrialisation of fireplace manufacture brought about the widespread use of mass-produced, standard-sized fireplaces including Welsh slate fire surrounds, cast iron fireplaces and wooden fire surrounds.

Fairclough, G.D. The Development of Ashton House, Beetham in the Long-eighteenth Century (University of Oxford, 2015)

Lakeland Fireplaces and Lighting was established in 1993 by Gordon Fairclough to bring a decade of experience in period interiors, historic properties and architectural antiques to the English Lake District. 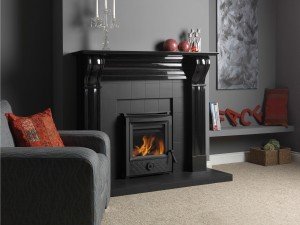